Discovery The Ultimate Keyboard for Windows Live and Vista

According to PCAdvisor a new slim, wireless keyboard is being developed by Microsoft's hardware division that will allow users of Windows Vista and Windows Live services to access key features more easily.

This keyboard apparently dubbed The Ultimate Keyboard will be announced later this year as part of a desktop package which will include a wireless laser mouse.

The keyboard is expected to have some nice new features buttons that no keyboard has ever had before, including a Windows Live Call button which will provide one-touch access to a list of Windows Live Messenger contacts to start a chat session with, a Gadgets button which will provide you with similar access to Gadgets in Windows Vista and also a round button at the bottom that will initiate the Start menu of Windows Vista or Windows XP but don't be fooled into thinking that this isn’t new because apparently this button will be supersede the Start menu buttons traditionally found next to Alt buttons on a keyboard.

So what else does this keyboard have? well apart from the usual docking stations to recharge the mouse and keyboard, this Ultimate Keyboard will also come with a new backlit technology, which will change the illumination of the keys depending on the light surroundings, so if the room is dark you can expect the keyboard keys to light up for you, it also know if a user is near by the keyboard.

It's clear that Microsoft are trying to get both Windows Live and Windows Vista united into hardware, but will this be a hit or will it not?

Well before you decide, why not take a look here at Microsoft's Teaser site created to showcase The Ultimate Keyboard and then decide for yourself if it will be a hit or not. 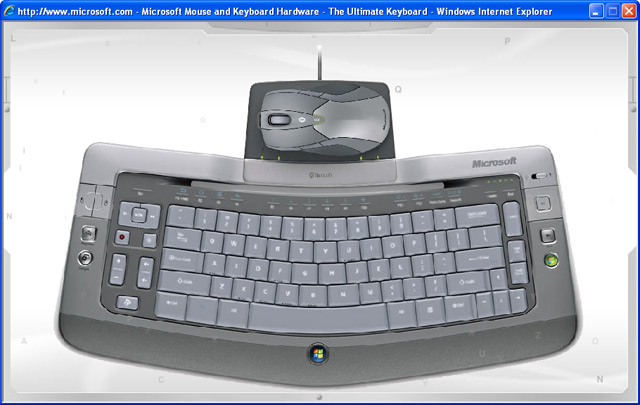