Is this for real?

It started with an interesting comment on the Live Search blog by a Group Product Manager for Live Search, hinting at rebranding efforts to come:

We’re glad you like the product and we recognize that there is a brand issue across Windows Live.  And we’ve been pretty upfront about that when we talk to customers and advertisers(http://www.seroundtable.com/archives/017296.html).  We’re working on fixing those issues so stay tuned.   Thanks for the feedback . . and keep it coming!

Shortly after that we received a tip from a reader about the comment, and then right after that we received a very interesting tip from someone who claims to work as a Quality Assurance Operator for Live Search, detailing a number of changes, including new UI and a new name, “Windows Live Search”.  We were asked to keep the tipster’s name quiet, and frankly we felt we needed a little verification before we proceeded with this very interesting news.

However shortly after that, our tipster apparently got over his shyness, and started a blog under his own name (if that is his name), posting some of the screenshots he sent us (we have some better ones, but for now we’re just linking to the ones he posted): 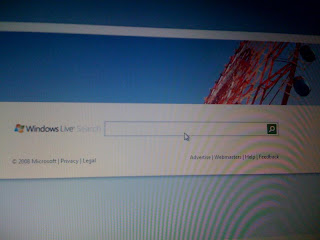 …which was picked up over at Neowin.  Since we were asked to keep the guy’s name quiet (which is weird since he then apparently started up a blog), we won’t mention it here.

However that’s not all.  We also got a tip the other day from LiveSide reader Mark McDonald from the UK who, while visiting PC World, a UK computer store, was shown a video on both a new HP and Sony laptop, touting the virtues of among other things Windows Live, “coming in 2009”.  He managed to snap a couple of shots on his iPhone:

Now we’re well aware that we could be on the receiving end of a hoax, but if we are, well here’s a hat tip to a rather elaborate ruse.  However if it is legit, then we’re seeing some pretty significant developments, including:

If this isn’t true, Windows Live should give our two tipsters a call and hire them as marketing consultants.