While we know that Microsoft Live Labs was shuttered almost a month ago – and the team was “transitioned” into Bing, it appears that not all the incubation projects went under Bing’s control (and it would make sense not to). Thanks to the heads up from Picturepan2 @ LiveSino.net, first of all we have the portions of the Seadragon project transitioning as a Microsoft Expression extension – Seadragon Ajax. The Microsoft Expression team announced the availability of Seadragon Ajax 0.8.8 today, which is a Deep Zoom viewing library implemented in pure JavaScript. The download pack includes the full source code for Seadragon Ajax, sample files, an API reference, and a set of How-To topics. 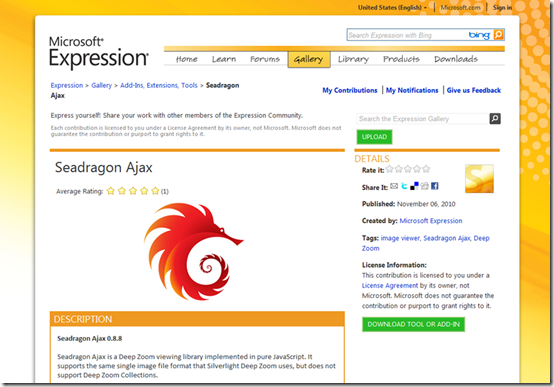 Next, Picturepan2 also noticed that the technologies from the now-discontinued Pivot project has also been transitioned into the Microsoft Silverlight team – with the Silverlight PivotViewer living on under the Silverlight brand.

Of course, there’s also Photosynth which had been released out of incubation before Live Labs shut down (and it’s part of the Bing team), as well as Zoom.it which is based on Deep Zoom / Seadragon technologies. While it was sad to see Live Labs go (it was started by Gary Flake, who’s left Microsoft too), it’s good to see that it’s incubation technologies are being incorporated into actual products.