Windows Phones available in US on AT&T website now

It’s still Sunday night here on the West Coast, early Monday morning in the east but still far too early for AT&T stores to open for the first day of Windows Phone sales in the US, but the AT&T website has their 3 phones available for order now (including free shipping): 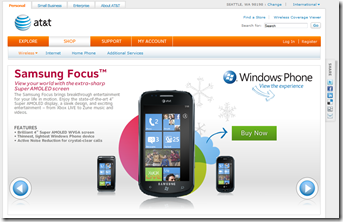 All three phones (the Samsung Focus, the HTC Surround, and the LG Quantum) cost $199 with new activation and a data plan from AT&T, and there’s no telling at this point how many phones AT&T has in stock.  The worldwide launch starting on October 21st in Australia and Europe was beset with outages, but it remains to be seen if that was a temporary glitch or an indication of a bigger problem.

Not to be outdone, TMobile also has the HD7 on sale: 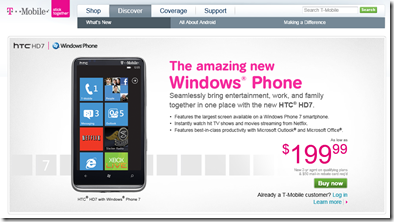 We’ll be heading to our local AT&T store in the morning (if you’re at Southcenter Mall, look us up and we’ll give you some LiveSide stickers!), just to see if there’s any commotion at all, and hopefully to pick up a Samsung Focus.  Are you planning on a day one purchase of a Windows Phone?  Let us know how you do in your local market in the comments, or tweet us from your new phone to @liveside !