The IE9 team has announced today that they’ve released a new Platform Preview (meaning no UI), dubbed “PP7”, on the 1 year anniversary of the first introduction of IE9 at PDC 09.  Since then, and specifically with the release of PP7, the new javascript engine within IE9 has seen continued improvements, and the SunSpider score for PP7 is 345% better than what was released at PDC. 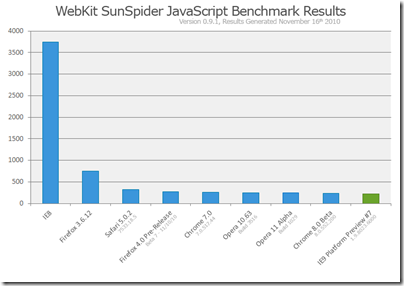 You can get PP7 from the IE9 download page or IEtestdrive.com, which includes thre new demos (HTML5 Galactic, Shakespeare’s Tag Cloud and HTML5 Sudoku Solver), and read more about it from the IE Team blog and the Exploring IE blog.

(Oh, and you can also try out running this latest Platform Preview inside the full IE9 Beta UI, just as with PP6, let us know if it works!)