Another new look for Bing Maps

Bing Maps has rolled out a new look today to coincide with the “AJAX V7 Control”, eliminating the need for Silverlight to view enhanced Bird’s Eye map views.  Silverlight remains a big part of Bing Maps, powering Map Apps, including StreetSide, which has now been promoted (demoted?) to a Map App, but is more in keeping with the “basic maps in AJAX, map apps in Silverlight” theme.

First, the basics: the new look Bing Maps features a simplified “Left-Rail”, making it easier to get quickly to (driving/walking/transit) directions, traffic, businesses, or Map Apps: 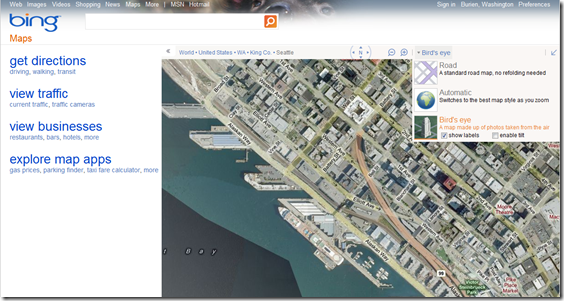 As you can see, there are a number of changes, some more subtle than others.  The Left-Rail makes getting to the most used features of Bing Maps easier, including Map Apps.  The top toolbar has been updated once again, this time completely renaming one of the core features of Bing Maps, Bird’s Eye.

StreetSide, dependent on Silverlight but much more prominently featured in the previous version of the Bing Maps home screen, has been relegated to only one of (currently) 55 Bing Map Apps.  It doesn’t appear to get any kind of special billing at all, although it is still very cool Silverlight powered technology, featuring street side views, and nearby images pulled from Flickr: 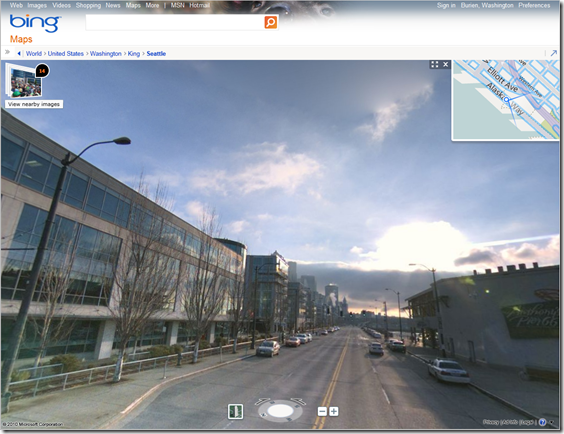 We’re still waiting to see some of the promised innovations from Bing Maps and Streetside, including embedded video and indoor panoramas, and so we still expect big things to come from StreetSide.

You can read more about Bing Maps AJAX V7 on the Bing Maps blog.  No word on US/non-US updates, if you’re outside of the US are you seeing changes?