(Too much?) Information on Windows Phones and SD Cards 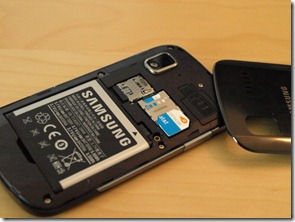 By now if you’ve been following the antics of Windows Phones, you’ve heard about the intricacies of Windows Phones and SD cards, and the warnings to wait until “Windows Phone 7 compliant” cards are made available to (at least) carriers and OEMs.  Engadget posted an interesting article recently that goes a little deeper into the issue, we’ll touch on that in a minute.

There are really three separate issues at play: first, Windows Phone 7 treats SD card storage differently than most if not all other phones with SD slots, and that’s important to remember.  You simply can’t use an SD card (even a WP7 compliant one) in a Windows Phone as removable storage .  Once you install it, the additional SD card storage is added on to the onboard storage and the phone simply sees a larger storage supply, all one big “blob”, so to speak.

Next, once that SD card is installed, which entails performing a factory reset on the phone, Windows Phone uses the “S” (secure) part of SD to lock the card, making it unreadable to any other device outside the phone.  Engadget has a neat trick to get around this involving, of all things, a Nokia phone.  You can read more on Engadget.

The last part of the SD card saga is that even if you are ok with creating a new larger blob of SD enabled storage, and you don’t plan on removing the SD card, only certain cards will work.  This (again, courtesy of Engadget) is because Windows Phone 7 requires certain random access speed thresholds to be met, and not all SD cards, regardless of their Class number, meet those criteria.  From Engadget:

What we’ve learned from our tipsters and from documents culled from Microsoft, Samsung, and others is that the big issue is random access performance — a figure that isn’t taken into account in a card’s class rating. Ironically, Microsoft discovered in its testing that cards with higher class ratings actually performed worse on Windows Phone 7 because the tweaks card manufacturers make to achieve high sequential throughput can actually hurt random access times. There’s some rocket science involved here, but basically, it’s a tradeoff and a bit of a gamble — if a manufacturer tunes a card for a high class rating, it takes more time to access the first byte at a new location on the card because it’s optimizing access for that area of memory, but once it does that, it can blast sequential bytes at very high speed.

Until Microsoft or the SD card makers or both release a list of “compliant” cards, the only choices now are to a) wait, or b) take a flyer on an SD card that *might* work.  But, of course, there’s another problem, because even if you find a card that apparently works, it might eventually cause problems.  From a KB issued by Microsoft on November 9th:

Microsoft and the Wireless carriers seem to want you to believe that *only* SD cards available from them will work, but a list over at XDA Developers shows a number of currently available retail SD cards that are working, including ones loaded with 10gb or more of content.

So if you want to live on the edge, adding an SD card from the XDA list just may work, and at worst you’ll just have to perform a factory reset on your phone (and either give up on or try and recover the SD card itself to use somewhere else) and start over.  You will have to do that anyway even if you wait for a Windows Phone 7 compliant card, so there doesn’t seem to be much of a downside.

Have you installed an SD card in your Windows Phone?  How’s it working for you?