In the first release of any sales numbers so far, Microsoft today in a press release interview of Mobile Communications Corporate Vice President Achim Berg, announced that 1.5 million Windows Phones have been sold from manufacturers to mobile operators and retail in the first month of availability.

Of course that doesn’t translate directly into 1.5 million phones sold to consumers, but it does give us our first solid indication of how well Windows Phone is doing, and early indications are that it is on track with how the iPhone and Android did in their early days.

In addition, news came out yesterday that Windows Phone apps are being released “faster than Android”, a good sign as developers, using Microsoft’s well positioned tools (Silverlight, XNA, C#), are beginning to jump on the Windows Phone bandwagon.

Microsoft itself hasn’t been quite as quick to join in, releasing a new Bing app last week… for iPhone and Android, but not Windows Phone.  An aside, one feature of the new Bing app, real time bus information, is available for Windows Phone (if you live in the Seattle area) by installing the OneBusAway app available in the Windows Marketplace. 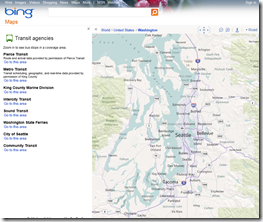 OneBusAway, an open source project started by University of Washington students, is also featured as a Bing Map App for desktop computers, you can read more about it on the Bing Maps blog.