CES 2011: Series of Windows Phone 7 updates coming in the next few months

Steve Ballmer’s CES 2011 keynote had just ended, and gave us very little to no surprises (if not slightly disappointed). One thing Steve did promise during the keynote in relation to Windows Phone 7 updates is the following:

Microsoft will release a series of Windows Phone 7 updates over the next few months, including adding the copy-and-paste feature and improving the phone’s performance when loading or switching between applications. Microsoft also is working to make Windows Phone 7 available from Sprint and Verizon in the first half of 2011, and more languages will become available later this year.

Note that besides those announced during the CES 2011 keynote such as copy-and-paste support and improvements to application switching performance, none of the other updates have been officially confirmed by Microsoft. We’ll probably have to wait until the Mobile World Congress during February 14-17, 2011 to hear more information about Windows Phone 7.

Update: The official Windows Phone 7 homepage has been updated with a page detailing what’s coming in the “January Update” (as the page is titled): 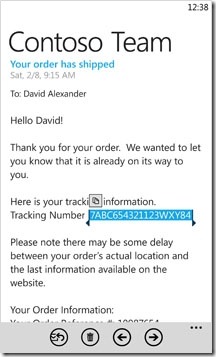 Soon you’ll be able to copy text from emails, text messages, web pages, and Office Mobile documents, and paste it anywhere you can type.

Using copy and paste is easy and intuitive. In many cases you just tap a word, slide your finger to highlight any additional text, then tap the Copy icon. To insert this text in a message or app, just tap the spot where it should go, then tap the Paste icon.

Copy and paste is a handy way to quickly send someone’s latest Facebook update, turn-by-turn directions from Maps, or a must-see link from Internet Explorer Mobile. Once you’ve copied something, you can paste it again and again.

The new feature adds to the list of time-saving shortcuts already built into Windows Phone, like the ability to tap an address on a webpage to map it (US only).

Nobody likes to wait. That’s why we’ve whittled down the time it takes for apps and games to start up and resume. It’s all part of our focus on getting you to the things you love, easier and faster.

We’ve streamlined Marketplace search to make it easier to find specific apps, games, or music. Press the Search button in the apps or games section of Marketplace and you’ll see only apps or games in the results.

Press Search in the music section of Marketplace to search just the music catalog.