Bing/Google: The Battle at Bigthink.com recapped

Sorry to say we missed all the commotion today, but apparently there was quite a donnybrook between Google and Bing, featuring a whole cast of characters, name calling, accusations, dueling blog posts, and tweet battles.  Whew,  if this keeps up, it could be a better movie than the Social Network!

Let’s see if we can recap, while you follow along at home.

This morning, just before a Bing sponsored “Farsight 2011: Beyond the Search Box” event, Danny Sullivan posted “Google: Bing is Cheating, Copying our Search Results”. (Later Mary Branscome was to question Sullivan’s  timing and motives for posting: “He seems to be saying he posted straight away because Google wanted him to.”).  Basically, according to the Sullivan post, Google engineers noticed that Bing was returning similar results to Google for certain searches involving obscure misspelled words.  Google set up a “sting”, and low and behold seemed to have proof that Bing used Google search results (captured by the Bing Toolbar, of all things) to show results on Bing.

In the post, Sullivan quoted Bing Director Stefan Weitz, saying he “seemed to confirm the allegation”.  Mary Jo Foley then asked for and got a more direct response from Bing:

“We do not copy Google’s results.”

Microsoft’s Harry Shum, Corporate VP for Bing, then posted on the Bing Community blog with some Thoughts on search quality, firing a couple shots back at Google:

We use over 1,000 different signals and features in our ranking algorithm. A small piece of that is clickstream data we get from some of our customers, who opt-in to sharing anonymous data as they navigate the web in order to help us improve the experience for all users.

To be clear, we learn from all of our customers. What we saw in today’s story was a spy-novelesque stunt to generate extreme outliers in tail query ranking. It was a creative tactic by a competitor, and we’ll take it as a back-handed compliment. But it doesn’t accurately portray how we use opt-in customer data as one of many inputs to help improve our user experience.

As we see it, this experiment confirms our suspicion that Bing is using some combination of:

or possibly some other means to send data to Bing on what people search for on Google and the Google search results they click. Those results from Google are then more likely to show up on Bing. Put another way, some Bing results increasingly look like an incomplete, stale version of Google results—a cheap imitation.

So to all the users out there looking for the most authentic, relevant search results, we encourage you to come directly to Google. And to those who have asked what we want out of all this, the answer is simple: we’d like for this practice to stop.

Indeed, this was getting interesting, as TechCrunch noted in “Wow, Microsoft and Google are Punching Each Other in the Face Right In Front of Us!”.  Both Matt Cutts from Google and Frank Shaw from Microsoft fired off inflammatory tweets, and things got even more interesting at the search summit at BigThink.com, with Harry Shum playing the search spam card:

I’d say you are really sidestepping the big problems, the origin of the spam, why they appeared in the first place. There must be an economic incentive to create his kind of content. Why? 70% of those pages show Google Ads….You can’t just say because you don’t report to VP of ad sales you have no problem.

Since we missed the whole thing, we’ve been searching for a copy of the webcast of Farsight 2011, and although it’s not up yet at Bigthink.com, Stefan Weitz promised us on Twitter that it will be soon: 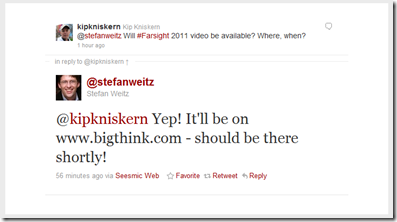 So what does it all mean?  Well probably more than anything, Google is getting more concerned about competition from Bing, and more willing to “take the gloves off”.  The reaction has been mixed as to whether Google’s indignation is warranted, but above all, it looks like this could get a lot more fun, can’t wait to watch the drama unfold!