Twitter coming to Windows Phone: what about Windows Live?

Today at MWC, one of the announcements about new features coming for the “Mango” release of Windows Phone later this year is integration of Twitter into the “People” Hub.  Currently, while there is a Twitter app for Windows Phone, Twitter, unlike Facebook, is not integrated into the hub.

Twitter continues to change the way we interact online, not only changing the way we receive information, but also the way we send information to our friends and the world beyond.  It’s a natural complement to the People Hub, a quick and easy way to find out what’s going on, without having to open a separate app, and Twitter will be a welcome addition to the People Hub and Windows Phone

Windows Live allows you to add in some 75 services and get updates through the Windows Live Profile, supposedly making it easier for you to get all your updates in one place: 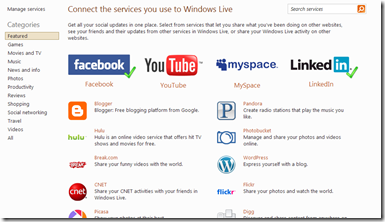 Of course without Twitter, it’s at least 2 places, which kind of defeats the purpose of the whole thing (and we’ve never understood what was so wrong about just setting up multiple tabs in IE, which is what we do).

We asked if the recent announcement about the availability of Twitter for Windows Phone would have an impact on Windows Live, and our Microsoft spokesperson “unfortunately (did) not have an update for you on twitter at this time”, so we’re going to have to wait to see if the #1 of all the services that should be in the Windows Live Profile makes a comeback.

Would having Twitter back with Windows Live Profile make a difference to you?  Are you excited to be getting Twitter in your Windows Phone People Hub?  Are you big Twitter users at all? (of course if you are, you should be following LiveSide on Twitter!).