LiveSide users, coming from all around the world, are quick to point out to us their pain when Microsoft and especially Bing features are released for US only markets, so hopefully here’s some encouraging news.  It looks like at least one country, France, has recently dropped the beta tag from Bing, according to a tip we received from longtime LiveSide reader Quikboy: 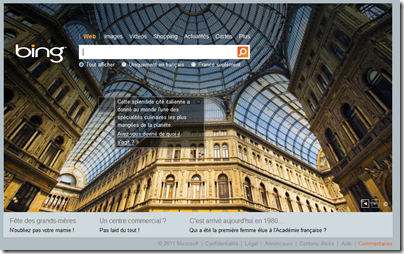 Quikboy says the beta tag came off March 1st, although we haven’t seen an official blog post on the subject.

(update):  There was a short announcement which slipped by us, thanks for the links in the comments!

A quick check of some other country specific Bing sites (you can quickly change to a different country site by using the query tag Bing.com/?cc=fr, changing the country code as needed) shows that other countries haven’t followed suit just yet, here’s the site for Spain: 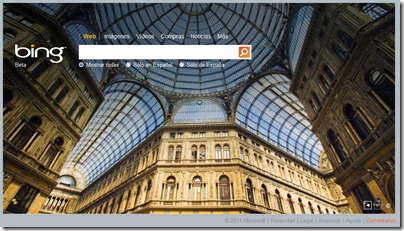 As you can see, aside from the Beta tag under the Bing logo, the French site includes the popup “hotspots”, while the sites still under beta do not.  The Beta tag also seems to come off of Bing Maps for France (Cartes), while the German site still has a beta tag, and Spain does not seem to have Bing Maps at all.

Notice anything new in your country’s Bing?