Back in September 2010, Microsoft revealed to the world the first beta of Internet Explorer 9, and along with it they demoed a version of Bing running HTML5-enabled code. While they promised that the HTML5-enabled version of Bing will be available to the public as a preview "within a month", we never saw any more news coming from Microsoft since then.

However, thanks to WinRumors.com, it appears that the HTML5-enabled version of Bing will be coming really soon, possibly coinciding with the Internet Explorer 9 release-to-web launch, rumoured to be around the MIX 11 timeframe. Along with this news, it seems like the Bing Preview Site also went live on http://www.bing.com/peek, showing the following: 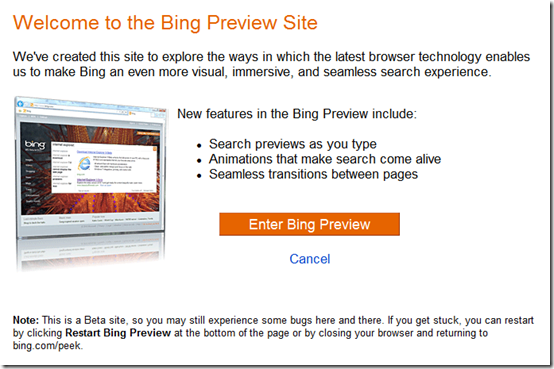 Unfortunately, clicking on "Enter Bing Preview" doesn’t really bring you the HTML5 features yet. However, we’ll update you on LiveSide as soon as it goes live. In the mean time, if you haven’t already, you can check out the video of the demo of Bing HTML5 preview shown during the IE9 beta launch as well as during Apple’s WWDC 2010: