When we last talked about FarmVille, we were a little late with our reporting (only *ahem* a year late), but these numbers, we assure you, are fresh: as FarmVille and even its newer counterpart CityVille fade in popularity on Facebook, the Windows Live Messenger app that allows you to chat seamlessly with either Windows Live or Facebook contacts, either via the Messenger client or through Hotmail, continues to gain steam.

In a blog post today, Frederic Lardinois at NewsGrange.com notes how Microsoft seems to have shifted strategy to their advantage by working with companies like Facebook rather than trying to clone them:

As I’ve said before, though, I also think that this speaks to how the mindset at Microsoft has changed over the last few years. Instead of building its own Facebook clone (and likely failing badly at it), the company has embraced working with market leaders in other areas, be that integrating other social networks deeply into Microsoft Live or working with Kayak to integrate better flight data into Bing.

The latest numbers from AppData.com, the Facebook market research arm of Inside Network, show that the Windows Live Messenger app currently has some 14.465 million active users, is at the moment #2 on the Daily Active Users (DAU) list (beaten only by CityVille), 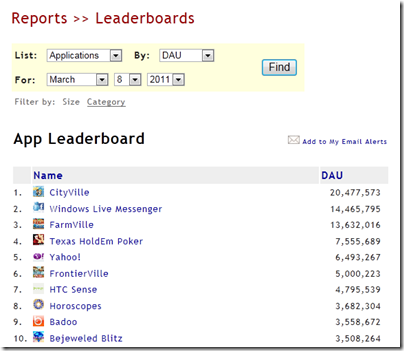 When we reported on Windows Live Messenger’s popularity back in November, it had some 9 million daily users, adding another 5 million or so in just over 90 days since then is impressive.  And it continues to grow, unlike FarmVille or CityVille, gaining 2%, some 300,000 users, on the week.  Windows Live Messenger is currently #9 on AppData’s Monthly Active Users (MAU) list with some 17 million monthly active users, still small compared to CityVille’s 93 million monthly active users.

While CityVille and FarmVille continue to lose steam, chances are good that WLM will move up the ladder.  That is, of course, until those Angry Birds show up on Facebook, reportedly in May, to take over the top spot.

Update: Piero Sierra on the Inside Windows Live blog has some more WLM numbers.