Last November, Bing Maps rolled out their version 7.0 of the Bing Maps AJAX control, which meant that users could view enhanced Bing Maps without Silverlight, and developers could work more easily with Bing Maps in their AJAX applications.  Now today, a post on the Bing Maps blog points out some of the speed improvements that the Bing Maps version 7.0 controls offer.

The post, guest authored by Brian Norman from independent interactive mapping experts Earthware, points out the improvements Bing Maps gained in downloading all the javascript, css and image files needed for a basic map to be displayed: 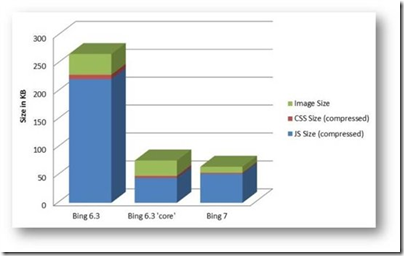 The diagram above shows just how large a difference in file size there was to load version 6.3 when compared to the reduced feature Bing Maps version 6.3 “core” control. However the latest Bing Maps release 7 employs a much smaller download requirement due to the decrease in file size and clearly now leads the field when compared to its predecessors.

Norman goes on to show the results of some tests Earthware conducted, recording how long it took to plot 1, 10, 100, 500, and 1000 pushpins on a map.  The graphs that the Bing Maps blog posts are impressive, showing a big improvement at the upper ranges of the test, but what is a bit more interesting is what they don’t show.

The Bing Maps blog post shows Bing Maps 6.3 versus Bing Maps 7.0, but in the blog posts on the Earthware site, the Interactive Mapping Blog adds a third contender, the latest version of Google Maps.  The first graph shows the time for the various map controls to add in the pins, with Bing Maps v 7.0  a clear leader in the upper ranges: 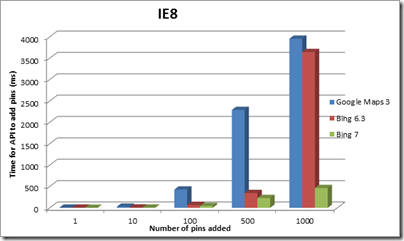 Pretty impressive, but even better is what happens in Chrome 5: 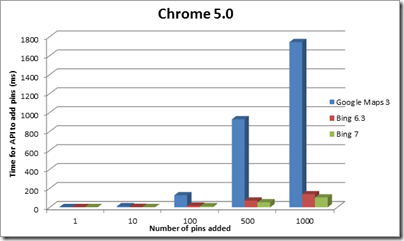 Obviously loading lots of pins on a map quickly, while impressive, isn’t a definitive test of online mapping solutions, but Microsoft has clearly done some quality work with the new version 7.0 mapping controls, even if they are a bit shy about showing it off on their blog.