Searching for news on the Japan earthquake: we find Bing maps lacking

Not the kind of news you want to get from Twitter last night as one last check of the news left us agasp at the magnitude and destruction of the earthquake and tsunami that hit Japan yesterday at about 2:46pm local time.  We quickly found a link and caught some sobering live footage of the tsunami engulfing much of Miyagi Prefecture on AlJazeera English, and of course went searching for more information, including on Bing Maps.

Does it make any sense that all of the text on Bing Maps of Japan is in Japanese, even when logged on as En-US?  Why isn’t it possible to create language specific text markup?  Here’s what we found after searching on “Sendai Airport” and clicking on “maps”: 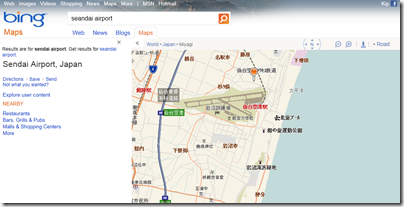 Although to be honest, the Google experience wasn’t much better.  Searching on Google for “Sendai Airport” gave us a map image and a link….: 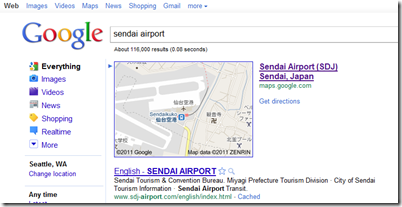 but clicking on either the map or the maps.google.com link didn’t get us very far:

We were of course able to eventually browse to a Google map of Sendai airport, which while it did include some English words, was far from really useful for an English speaker: 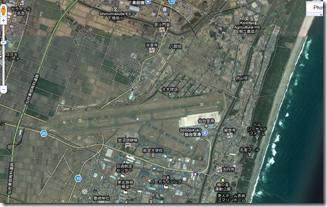 We don’t mean to make light of the continuing tragedy that is unfolding in Japan, as major earthquakes are still occurring as of this writing, and applaud both Google, who have been quick to deploy a “people finder” and create links to more information on Google, and to Microsoft, who released a statement on their efforts to help their employees, their partners, and the people of Japan.  But isn’t it time we’re able to actually use maps, whatever they map in the world, quickly and, well, usefully?

Our thoughts and prayers go out to the people of Japan.