IE9 was just released this week (you can get it here), and for many there will be a rush to upgrade.  In China, however, it’s a different story.

In preparation for the launch of IE9, a few weeks ago Microsoft unveiled an IE6 “Countdown” site, with the objective of “moving the world off Internet Explorer 6”.  The site features a countdown clock showing IE6 usage by country, and it didn’t take much to noticed that China still is by far the biggest user of the aged and non-standards compliant browser: 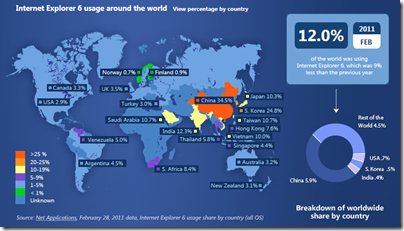 Some 34.5% of internet users in China still use IE6, and according to a new CIA study on internet use worldwide, that’s a significant number: 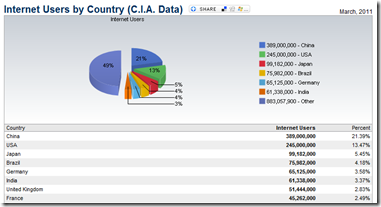 Doing some rough math, that’s about 134 million IE6 users in China alone, quite a staggering number.  So why is usage still so high?  A post on the M.I.C. (Made in China) Gadgets blog offers up some insights.  One main reason is that software piracy runs rampant in China, with the M.I.C. Gadgets blog quoting that some 90% of Windows installs, of which 81% are Windows XP, are pirated.

China has dramatically different browser usage patterns than developed countries. Most Chinese people are still using IE6, due to many of them still using old Windows XP machines, and failing to upgrade the hardware, the OS and its default browser. XP users who want to run a newer version of Internet Explorer, such as 2006’s IE7 or 2009’s IE8, have had to either manually upgrade or accept a browser upgrade from Windows Update. But in China, over 90% of software is pirated, most Chinese users never connect to Windows Update or even upgrading their web browser. The reason for this is because most Chinese users are afraid that Microsoft will detect their software as illegal, and disable or cripple it. While anyone can install IE7 or IE8 manually, even on a cracked XP install, but the lack of automated updates likely discourages Chinese users to give up IE6.

However the blog post goes on to give another, and perhaps even stronger reason for the hesitance to move off of IE6: unlike most of the rest of the world, which moved away from supporting IE6 on websites to support more modern browsers, significant Chinese sites still support, and sometimes only support, IE and IE6:

Another main reason for IE6 still remaining popular in China, is because most commonly used Chinese websites have been constructed and tested to work with IE6 only, without consideration of web standard (W3C), non-IE browsers (Firefox, Safari, Chrome), or non-Windows platforms (Linux). For example, the China Government’s IT department registration website (MIIT), is IE6 only. Without IE6, authorities cannot file their registration information (story see here). Online banking in China is also strictly a Windows and IE6 love affair. They usually used ActiveX login system, any western companies setting up their brunch office in China, must install IE6 in their Windows PCs, otherwise no work can be done through any of the major Chinese banks. The same case for those China major online shopping sites, which require their customers to use IE, rather then other web browser’s options.

With many popular western sites (ones that would work much better on a more modern browser) like Twitter, Linked-In, Facebook, etc. blocked by the “Great Firewall”, even more incentive to move off of IE6 has been removed (although we doubt that’s much of a reason for the blocks).  Until China tackles the software piracy problem, Chinese users move to more modern computers and operating systems, and Chinese sites begin to support more modern browsers, the IE6 Countdown map will continue to show significant IE6 usage.