A pair of social networking tidbits featuring Bing – first, according to a tweet tipping Search Engine Land by Bing Program Manager Min John Lee, Bing Social is now surfacing  “Public Updates” on the news results page.  The streamed tweets show up in the right sidebar, and scroll through a list, although you can pause the streaming effect: 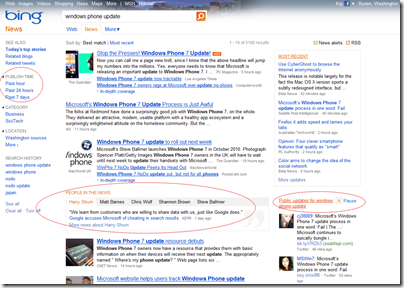 Actually there’s quite a bit new on the News page recently, we’ve had a number of readers report on the “Publish Time” and “Narrow by Date” filters that have been showing up recently in Bing’s left hand column, we’re not quite sure when “People In The News” showed up, it could have been there for quite a while (have you noticed it before?), and the new Public updates widget is in the right sidebar.

Public updates themselves are not new, we reported on social updates in Bing last April, and the Bing Social vertical was unveiled at SMX Advanced in June.  However bringing them onto the News page is something that did happen only a couple of days ago, according to Lee’s tweet:

Then, AllFacebook.com posted on reports that Facebook was apparently testing out a dedicated web search bar.  However Search Engine Land was able to check with Facebook, and they denied testing, or planning on testing any such second search bar.  The second search bar was presumed to be a hoax or malware, but was not coming from Facebook itself.

Microsoft has had a long relationship with Facebook, even before it invested $240 million back in 2007, setting Facebook’s value at a whopping $15 billion dollars (recent estimates of Facebook’s worth are well north of $50B).  Bing search does power web search from within Facebook now, and the speculation would be correct that a Bing/Facebook expansion could have a significant effect on the marketplace.  It’s not happening, at least not this time.