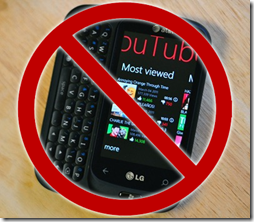 For all Windows Phone 7 users out there who had installed the official "YouTube" app from the marketplace, you’d immediately notice it’s lackluster functionality compared to its counterpart in iOS and Android. In fact, all it does is launches the mobile version of YouTube in the IE Mobile browser. You’d wonder why an official Microsoft-made app would be of such poor quality? Microsoft tells you why in their formal complaint with the European Commission on Google’s antitrust behaviours:

[In] 2010 and again more recently, Google blocked Microsoft’s new Windows Phones from operating properly with YouTube. Google has enabled its own Android phones to access YouTube so that users can search for video categories, find favorites, see ratings, and so forth in the rich user interfaces offered by those phones.  It’s done the same thing for the iPhones offered by Apple, which doesn’t offer a competing search service.

Unfortunately, Google has refused to allow Microsoft’s new Windows Phones to access this YouTube metadata in the same way that Android phones and iPhones do.  As a result, Microsoft’s YouTube “app” on Windows Phones is basically just a browser displaying YouTube’s mobile Web site, without the rich functionality offered on competing phones.  Microsoft is ready to release a high quality YouTube app for Windows Phone.  We just need permission to access YouTube in the way that other phones already do, permission Google has refused to provide.

So it seems Microsoft is fully ready to release a proper YouTube app, but Google had refused to allow Microsoft to do that. Not only this, but Microsoft also states that Google had been blocking Bing from properly displaying YouTube videos in its search results:

In 2006 Google acquired YouTube—and since then it has put in place a growing number of technical measures to restrict competing search engines from properly accessing it for their search results.  Without proper access to YouTube, Bing and other search engines cannot stand with Google on an equal footing in returning search results with links to YouTube videos and that, of course, drives more users away from competitors and to Google.

Microsoft also accuses Google on several other anti-competitive practices, including the recent book publishing court case as well as Google’s prohibitive control over advertiser’s data and website’s search box. For the corporate giant which had been on the other side of the antitrust cases with the European Commission over the past 10 years, they are definitely making a fight back. What do you think about this move by Microsoft? Let us know in the comments below.