Bing: Streetside for Germany, and the return of the Like button

Little bits of Bing news popping up all over: first up is news via Search Engine Land that Bing Maps is about to fire up its Streetside photo cars in Germany.  A recent court case in Germany ruled in favor of Google’s Street View, although a similar case in Switzerland found Google in violation of privacy laws, saying it must manually blur faces and license plates from Street View images when they are not automatically blurred:

Google currently uses automatic blurring technology to obscure people’s faces and vehicle number plates and says that it is 99% effective. Swiss citizens can also request additional blurring of an image via a link on Street View.

In its ruling, the court said that Google must manually obscure or blur identifying features rather than relying exclusively on the automated technology, particularly in the vicinity of "sensitive establishments" such as women’s shelters, retirement homes, prisons, schools, courts and hospitals. 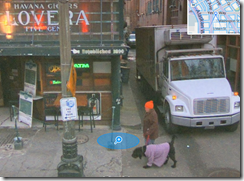 According to German website Deutsch Welle, Microsoft is set to begin taking Streetside photos in Germany, in conjunction with Nokia-owned Navteq, which licenses mapping imagery to Microsoft.  Microsoft has announced which cities and where the images will be taken, promises to blur images of residences and has taken pains to make the opt-out experience easy, offering a “statement of objections” on a website.  Ironically, with all the work they are doing, legal experts don’t expect much objection from Germans regarding Bing Maps, as “almost no one uses them” (Google’s market share in Germany is well over 90%):

"[Microsoft] waited until the high emotions as to Google Street View decreased and could then use the experiences of the Google Street View Project for their purposes," Thomas Hören, a law professor and privacy expert at the University of Münster, wrote in an e-mail sent to Deutsche Welle.

"The only problem is: it is Microsoft, not Google who is preparing the project. Who is using Bing today? Almost nobody!"

A bit more Bing news: we told you about the appearance of a Facebook “Like” button on the Bing home page a while ago, and now it seems to have made a comeback.  The Like button only lasted a few days for us in its last incarnation, no telling how long it will stick around this time.  Are you seeing it?