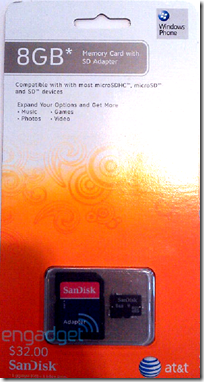 The situation has changed, and Engadget today reported that Windows Phone 7 Certified microSD cards are now appearing at AT&T stores. According to the website, these are 8GB Class 4 microSDHC cards manufactured by SanDisk, and are available for USD$32. Unfortunately, this is the only capacity available at the moment, meaning users can only get a total of 16GB on their Samsung Focus if they want to stay on the safe side.

The second piece of news coming out from AT&T is that the LG Quantum and Samsung Focus will finally be getting the "NoDo" update on April 19th. Microsoft has updated the Where’s my phone update? page with the latest information. Unfortunately, the update for HTC Surround is not yet available and is scheduled for availability around mid-May according to a leaked AT&T email (thanks WinRumors). Eric Hautala, General Manager for Customer Experience Engineering, explained the situation on the official team blog:

But we know we still have plenty of work to do. The HTC Surround, for example, won’t be joining the update party just yet. I know that probably comes as a letdown to Surround owners, so let me spend a moment explaining why.

The updates we deliver contain a complex stew of software code. The content often includes not only our fixes and improvements but also software supplied by companies that make the phone itself and the chips inside it. One of these third-party software “packages” earmarked for the HTC Surround needs additional testing by both Microsoft and AT&T. I apologize for the delay. As soon as I have more news, I’ll let you know.

So to all those LG Quantum and Samsung Focus users out there, it’s only a few more days until you can finally get your hands on the "NoDo" update. We definitely hope the update process would be much quicker with the upcoming "Mango" update. Let’s hope Microsoft has learnt their lesson this time!