A couple of weeks ago, after Microsoft released a “Windows Phone Support Tool”, complete with wide open dlls that allowed ChevronWP7 “homebrew” hacker Chris Walsh to create his own little NoDo updater tool, we crossed our fingers and updated our Samsung Focus (on US AT&T) to NoDo.  Purely in the interest of journalism, mind you (and ok, we’re a little gullible when it comes to new toys).

Since then our phone has been working fine, complete with copy/paste (yawn), an improved Marketplace search (yay! very useful!), and some performance updates (still waiting for Mango multitasking).  However, and this should go without saying, Microsoft was none too happy with Chris Walsh, and they made him take down his updater tool, insisting that it “breaks phones”.

So today of course is the big day for Windows Phone if you’re an AT&T Samsung Windows Phone owner, the day (correctly predicted by Tom Warren) when AT&T starts… finally…. shipping the NoDo update.

Of course we’ve been a bit nervous about what’s going to happen (or not happen) to our phone, so today when we spotted a thread (via twitter) on XDA-Developers, we jumped to our phone.

Checking the phone itself yielded no update (through the Marketplace or “update my phone” in Settings), but plugging the phone into the PC, firing up Zune, did immediately show a “Samsung Update” 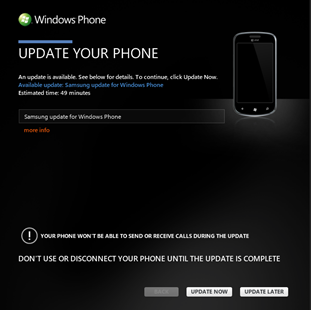 After downloading the update, Windows Phone/Zune creates a backup:

Be forewarned, this takes a while (depending of course on how much stuff you have on your phone.  Quite a bit here with the 16gb sd card extension we dropped in (also with no problems that we’ve noticed, been using it for months).  Next up is “Installing updates”, with a progress bar on the phone.  This also takes a while, sorry didn’t time it but looks to be about 10 minutes or so.

OK then we reboot, and we’re all good to go!

Here’s the About info:

Our OS version was already 7390, and afraid we didn’t check the other numbers, if someone wants to check their pre-Samsung update revision numbers that would be great.

Just did a quick check on the phone, everything seems to be working fine, with what is seemingly some noticeable performance improvement.

So unless the phone starts melting or something, it looks like doing a Walshie on this phone at least hasn’t caused us any problems.  We’ll keep you posted.