Yahoo and Microsoft: is the honeymoon over?

This week a couple of news items seem to suggest that Microsoft and Yahoo, while still closely linked via their Search agreement, are beginning to air their differences.  As both partners and competitors, this is probably to be expected, but Yahoo! took a couple of shots at Microsoft and Microsoft Advertising yesterday in their earnings call, while in a seemingly unrelated development, Hotmail unveiled a website making it easy to move your email to Hotmail…. from Yahoo!.

We won’t go into all the details of the Yahoo! earnings call, basically Yahoo! laid at least some of the blame for its showing this last quarter on Microsoft’s search advertising “underperforming”.  Mary Jo Foley quotes Yahoo! CEO Carol Bartz on the problem:

From a transcript of Bartz’s remarks during the April 19 Yahoo call:

“adCenter isn’t yet producing the RPS we hoped for and are confident as possible. Advertisers are seeing strong ROI (return on investment), but technical limitations in the current adCenter platform mean the click volumes just isn’t there yet. We had expected RPS to be neutral by midyear, it’s now evident that it will take Microsoft longer to achieve that goal. We expect that to happen by year-end. In the meantime, the RPS guaranty helps protect our revenue and our view of the long-term potential of the marketplace remains unchanged.

“We are working very close with Microsoft on this. They understand the issues and they’re hard at work on systems architecture, science models and better features and functions in adCenter. They have an aggressive roadmap to bring those to the marketplace.”

Danny Sullivan, in an exhaustive piece on Search Engine Land entitled “The Yahoo Search Disaster”, isn’t quite buying Yahoo!’s assessment of its problems, pointing out that searches across Yahoo! are down, which he seems to think is a bigger problem than just adCenter.

And then, in a somewhat weird kick-em-when-they’re-down announcement yesterday, Hotmail unveiled a website aimed specifically at getting Yahoo! Mail users to switch to Hotmail, just as Yahoo! is set to bring their new email version out of beta. 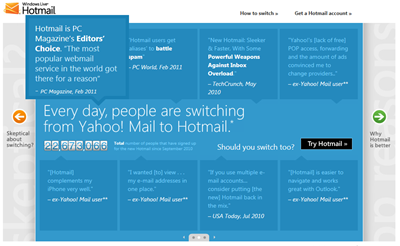 With SwitchtoHotmail.com, users are offered testimonials and an easy way to switch from Yahoo! to Hotmail, using TrueSwitch.  You can read more about it on Inside Windows Live.

While we are pleased with the efforts Hotmail is making to become the web based email provider of choice, we found it interesting, even if purely coincidental, that SwitchToHotmail.com arrived on the same day as Yahoo!s quarterly earnings.  If things don’t improve for Yahoo! soon, we may see Microsoft continue to take a more aggressive approach to capturing Yahoo! users.