Bing on Windows Phone “Mango” to get Bing Vision and Music search? 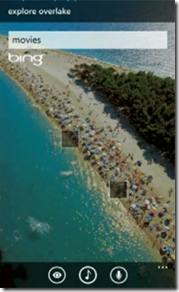 One sharp-eyed reader over at WMPowerUser.com noticed something different on a video Ars Technica posted about the new "Bing Search Extras" feature coming in the Windows Phone "Mango" update. The video briefly showed two additional buttons added to the main Bing app interface, as shown in the screenshot on the right (near the bottom).

While the microphone button on the right clearly resembles the voice search capability found in today’s Windows Phones, the other two icons appear to be new. The first icon, which resembles an eye, seems to suggest that Bing Vision may be coming to Windows Phone. If you haven’t heard of Bing Vision, check out the video we posted earlier last year which shows it in action. In simple terms, Bing Vision allow users to use their phone camera to capture visual data for searches. For example, it can be as simple as capturing an image of a barcode and Bing Vision will return the results of the product associated with that particular barcode. Alternatively, as demonstrated in the video below, Bing Vision also allow users to quickly search texts within an image, and it will recognise the characters and returns with the relevant search results. Check out the video below (Bing Vision starts at around 3:28):

The second icon, which resembles a musical note, seems a bit more obscure as to what it really does. It may be a tie-in to Bing Music search, or it could be simply a shortcut to searching the Zune music marketplace. WMPowerUser.com is suggesting that it might be bringing Shazam-like functionality to search for songs and albums based on microphone input. What do you think it may be? Leave us a comment below.

Regardless of what these new functionality are, this discovery definitely proves that more things are coming as part of the "Mango" update this fall. In fact, during MIX 11 we heard that there would be a lot more stuff coming for Bing in the upcoming "Mango" update, so could this be it? Or is this just the tip of the iceberg? We’ll keep you posted as soon as more information comes out!