We all saw during the MIX 11 conference that Microsoft will be expanding language support to 16 different languages, including East Asian languages such as Chinese, Korean and Japanese: 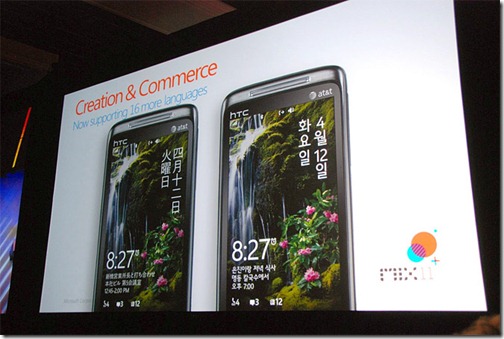 It appears Long Zheng from iStartedSomething.com has more information about this coming from the conference. Here’s what he said:

East Asian support is not only the introduction of a new character set but actually a slightly modified implementation of the Metro design language.

To accommodate the bigger size of character-based writing, the Windows Phone design team is adopting a vertical text layout to reduce the amount of text clipping that would occur more frequently (than it already does). The vertical text will not be limited to just the date and time on the lock screen but will also be featured in hubs (panoramas) and other native apps.

However, he also mentioned that the vertical layout might not come as part of the templates that comes with the official “Mango” SDK, due to be released later this month, indicating that third-party apps might need to emulate the effects in their apps.

We do expect Microsoft to be slightly refreshing the Metro look as well, with Long saying that “[The Windows Phone design team had already indicated they were hard at work on the evolution of Metro.” Of course, with Microsoft applying the Metro design language on certain touch-based elements of Windows 8 and Office 15 as well, there’s definitely elements that could be better tweaked to accommodate the wider range of devices and screen-sizes.