OK so we’re a little upset we weren’t able to make it to New York today for the Mango announcements, but we’ve been making up for it by keeping a close eye on all the tidbits coming out today, and there’s bunch of them.

At the top of the news, it looks like our friend Tom Warren at WinRumors got himself quite a scoop, and quite a tour of the “new SkyDrive”. According to what Tom was told:

Microsoft is overhauling the user interface of SkyDrive. The new interface will include a HTML5 version of its image viewer, alongside a refreshed interface to view documents and files uploaded to the free service.

Tom has some images of the new, as yet unreleased SkyDrive in action:

In case you can’t see it clearly, we’ve got a clearer version showing what the top bar says (and yes, we posted the first screenshot of SkyDrive Wave 5 just over a week ago):

Promising to make it easy to “find all your files, photos and the stuff you share with groups in one place”, it sounds like we’ll be seeing the end of some of the fragmentation that has seen SkyDrive in its current form exist for phones, Office, and web, but all inaccessible to each other.

Next up, and also coming by way of WinRumors, while Tom was being shown SkyDrive and Office on Windows Phone Mango, we noticed that among the color coded document tiles was a set of gray tiles marked PDF: 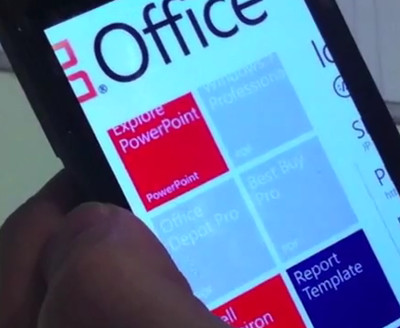 While again, a bit hard to see, it looks like Mango may have PDF abilities built in (or at least added on).  Quite useful!

Manan Kakar is at the Mango event, too, and he’s been sharing some bits via twitter.  First up, confirmation that Twitter is not only coming to Mango as part of the people hub, but it’s coming to Windows Live activity feeds as well:

Manan also tweeted that OEMs won’t be releasing Mango all at once, as they did with the Windows Phone launch, but “with time gaps & independently”, and that “the Me tile will finally be a bit more useful. Ability to toggle Messenger status & check ins”.