Earlier today we revealed that a new SkyDrive is coming which will bring Photos and Office documents together in a new HTML5-based user interface. In case you missed it, here’s a screenshot of it in action:

With the new Windows Phone "Mango" release, we will also see improved SkyDrive support which allows not only Photos and OneNote sync as in the current Windows Phone 7, but also support for Word, Excel and PowerPoint documents. We also noticed that PDF sync will also be supported in the Office hub, and Windows Phone will automatically open it up in the Adobe Reader app (if not available, you will be prompted to install the app) (thanks My Microsoft Life for the photo):

What makes it more interesting is that when Derek Snyder, Executive Communications Manager for Windows Phone, demonstrated SkyDrive support in a video from Pocketnow.com, he (accidently) accessed one of the SkyDrive folders with a music file inside. Here’s what he said:

With SkyDrive … we have the ability to help you find applications [to open specific file types] … So there we have music that’s came in, and I mean all that stuff is available. 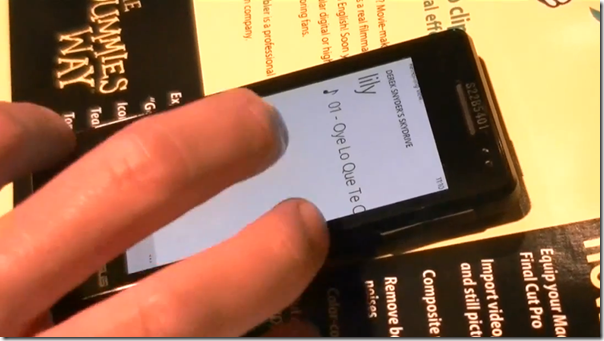 We’re not exactly sure whether these music files stored on SkyDrive can be directly played back on the phone, however there’s definitely that possibility (although accessing music from the "Office hub" sounds a bit weird).

One of the missing gaps with SkyDrive currently is the inability to playback or stream music and video files directly from the cloud. Microsoft had been ahead of the crowd with their Zune Pass cloud-based music subscription service, however this does not support storage of personal music collections on the cloud, nor is it available worldwide (besides US, UK, France, Italy and Spain), and their competitors had been catching up. Amazon and Google has recently launched Amazon Cloud Player and Google Music Beta respectively, and Apple is rumored to have signed deals with music labels for their upcoming iTunes cloud music service too. We’ve heard rumors of a "Windows Live Zune" before, and Microsoft definitely have the ability to enhance and reform their cloud music offerings. It’ll be interesting to see how it plays out in this space.