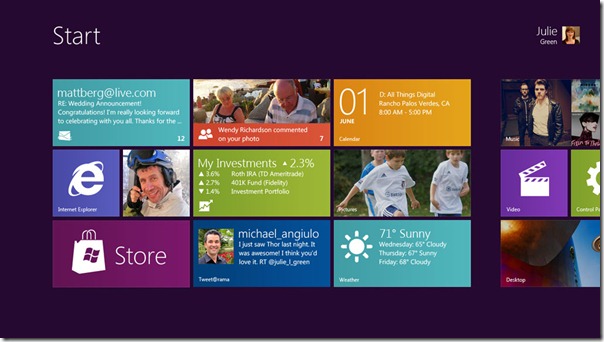 Today at the All Things Digital’s D9 conference, Microsoft’s Windows and Windows Live President Steven Sinofsky joined Walt Mossberg on stage and showed off for the first time the "Immersive" user interface for Windows 8. According to Microsoft’s press release, below are some of the things that were shown off in today’s demo:

You can check out the video from the D9 event this morning for yourself here:

On the other side of the world, at the Computex Taipei Exhibition, Microsoft also showed off some more details about their Windows 8 operating system, including several hardware (specifically tablets) running on ARM and other SoC processors. According to Microsoft, all applications that exist on Windows now will run on ARM devices. Several tablet hardware requirements were also detailed, including minimum screen resolutions, touch considerations, and more. You can check out full live coverage of the Computex exhibition on Engadget.com.

Last but not least, Microsoft also announced that more details about Windows 8 will also be revealed at their new BUILD: Windows event, replacing PDC, to be held between September 13-16 in Anaheim, California. LiveSide will be attending this event to bring you full coverage on Windows 8 and more. So stay tuned!