Today at SMX Advanced, Bing Director Stefan Weitz took the stage to talk with Danny Sullivan, take questions, and make a couple of announcements.  First, the newly revised Bing Webmaster Tools (code-named Honey Badger – there were a number of YouTube references, a stuffed Honey Badger, and assurances that Bing’s Honey Badger does care (watch the video)) were released today.  Minus Silverlight (it’s gone) and including a number of new improvements, like user management to allow read only and read/modify access to the tools, the Index Explorer, and more granular crawl error data, the new Webmaster tools are worth a look. 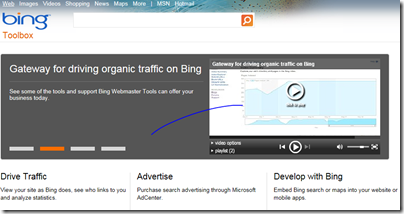 With the Business Portal, small business owners, who may not have a web presence at all otherwise, will be able to manage their presence on Bing, providing location and contact information, and even offering up deals to those who find them on Bing.

Weitz also took some time to talk about the newly announced collaboration with Google and Yahoo!, Schema.org.  Announced this week, Schema.org provides a way for websites to present their data, using extensible markup, in a way that makes it easier for websites to understand.  From the Schema.org website:

Many sites are generated from structured data, which is often stored in databases. When this data is formatted into HTML, it becomes very difficult to recover the original structured data. Many applications, especially search engines, can benefit greatly from direct access to this structured data. On-page markup enables search engines to understand the information on web pages and provide richer search results in order to make it easier for users to find relevant information on the web. Markup can also enable new tools and applications that make use of the structure.

Sullivan asked Weitz why websites should even need to bother with the markup, asking “isn’t that what you guys are supposed to do?”.  Weitz responded that while search engines work at getting structured data right, Schema.org allows for sites to manage the way their data is presented on the web.

Weitz also took the opportunity to talk about the “So” in Social Search, detailing the advantages Bing’s partnership with Facebook brings to search. Asking “so why should we care about social?” Weitz cited data showing that some 80% of users, faced with a  buying decision initiated in a web search, still ask someone about it before making the purchase (Weitz used the example of a husband calling his wife “before he buys that Maserati”).  Sullivan and Weitz talked a bit about Google’s response, releasing Plus 1 and utilizing Twitter results instead of the deep integration with Facebook that Bing enjoys.