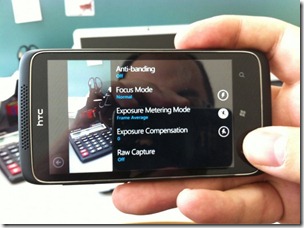 News broke out from WinRumors.com that Microsoft is planning to make available Windows Phone "Mango" developer handsets to people’s hands as early as next week. It is said that the these handsets will be given out in several rounds, however, the exact device model is not yet known.

Microsoft had been using their ASUS E600 devices for various Windows Phone "Mango" demoes, and this is the unit which were given out to limited third-party developers before Windows Phone 7 was released last year. Microsoft had also been using HTC Mazza, which visually looks similar to the HTC Trophy but with updated CPU and GPU and features a 12-megapixel camera, for their recent demos during the Windows Phone “Mango” VIP Press Event.

However, not all developers will be given one. According to the latest tweets from Brandon Watson, Director of Developer Experience on the Windows Phone team, the devices will only be made available to "serious developers", and must make a connection with their local "Windows Phone 7 Mobile Champions". Here’s the tweet:

If you consider yourself to be a "serious developer", but don’t know who your local WP7 champ is, you can check out the listing here, and start connecting!