The ChevronWP7 team, consisting of Long Zheng, Rafael Rivera and Chris Walsh, released a Windows Phone 7 Unlocker Tool back in November last year, allowing users to developer-unlock their WP7 devices for free. This tool was then quickly pulled by the team a week later following discussion with Brandon Watson, Director of Developer Experience for Windows Phone, and the tool was also blocked from working with the "NoDo" update.

The team then met with the Windows Phone team at Redmond earlier this year, promising that they will continue to work with Microsoft to provide "long-term solutions that support mutual goals of broadening access to the platform while protecting intellectual property and ensuring platform security." While details of the discussion was under NDA, the team has finally unveiled early details of what’s to come for the homebrew community, with an announcement of the ChevronWP7 Labs: 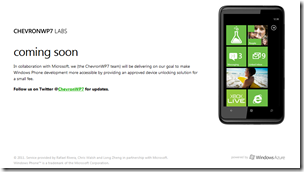 As you may remember, one of our goals was to make Windows Phone development more accessible. Plans have recently solidified and we can now reveal a solution we’ve been working on.

As announced on the Windows Phone Dev Podcast, we will soon be launching an approved Windows Phone unlocking service as part of ChevronWP7 Labs. This will be available to developers across all skill levels and all regions.

The service will require a small fee — currently via PayPal — to offset costs but we assure you it will be more affordable than the App Hub. Those who wish to write and immediately publish apps are recommended to sign up to the App Hub instead.

You can check out ChevronWP7 Labs here, powered by Windows Azure. The team promises more details will be coming soon, so stay tuned for more news soon!