Windows Phone “Mango” public beta to be available to App Hub developers in the next 24 hours? 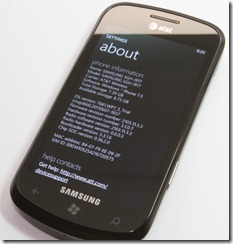 Microsoft lifted the embargo yesterday on Windows Phone "Mango", and various websites around the internet had been giving Windows Phone "Mango" beta an in-depth review, reportedly using the production devices given out by Microsoft for review purposes. You may be wondering, why the sudden release of reviews on this day?

According to Neowin.net, this is because Microsoft is due to make the Mango beta release available to all subscribers via the App Hub. It is reported that Microsoft is set to announce this news within the next 24 hours, with the Mango beta build available for download on June 22nd or 23rd. While the actual developer devices may be distributed to limited "serious developers" only, the software download release will be available to all App Hub developers, and can be loaded on all current Windows Phone production devices.

Based on the latest reviews, the devices given out by Microsoft for reviewers carries the build number 7.661.WP7_5_Trial (mojobld).20110607-1957. However, this build doesn’t yet support Twitter integration in the People hub, which requires Microsoft to flick the switch on the server-end. Could this be the build that will be released to the App Hub within the next 24 hours? Stay tuned!

(Image credit: SlashGear) Update: Apologies for the confusion, the article should refer to App Hub rather than MSDN subscription.

Update 2: Thanks to Scott in the comments below who pointed out the following tweet from Brandon Watson, Director of Windows Phone development, debunking this rumor (what a shame):