Mango is here (for developers)

Yesterday it was Angry Birds available a day early (well, after being months late), and today, developers enrolled via the Windows Phone App Hub (after paying $99) or DreamSpark members (free for students) can get “Mango” on their Windows Phones, now, according to a Next At Microsoft blog post from Steve Clayton.

More details are available from a Windows Phone Developer blog post by Brandon Watson, including instructions on the necessity to pay careful attention to the instructions, and to “follow them to the letter”.  Good advice!

Brandon Watson includes a bit of advice of his own at the end of the blog post:

So what now? First, go get the tools. Second, update your retail phones to Mango. Third, go rub it in your friends’ faces that you have Mango and they don’t. Fourth, start building your Mango apps using some of the cool new functionality like fast app resume, updated Live Tiles, Motion Sensor, Live Agents, sockets, background audio or raw camera access. There will be a tools update in the coming months which will have the go-live license you need to publish Mango apps to the Marketplace, but don’t wait. With the tools and the ability to test on Mango enabled phones, you should all be in really good shape when Mango is released later this year.

For the early access program, here are the countries which are explicitly supported – meaning that should your device become unusable as a result of updating, we will be able to process it for fixing once the full distribution infrastructure is fully operational in the next couple of weeks:

You can get the SDK Beta 2 tools needed to get you started here: 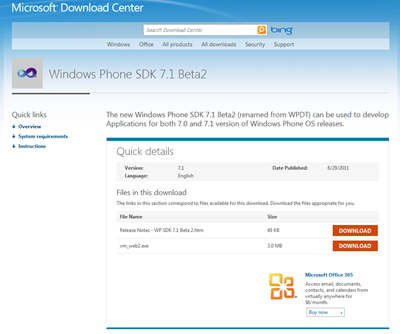