Twitter confirmed to be coming back to Windows Live

Microsoft discontinued support for the Twitter connected service in Windows Live back in June 2010 due to policy changes made on Twitter’s end, and never reached an agreement with Twitter since then to make it available again. During Mobile World Congress 2011, Microsoft announced that Twitter will be integrated into Windows Phone "Mango", however nothing was said about Twitter for Windows Live.

In April earlier this year, we noticed a test tweet from Microsoft which seems to indicate that Twitter might be coming back to Windows Live. Today while I was setting up my Windows Phone "Mango" beta and see if I could add my Twitter account to my phone, I was greeted with this dialogue: 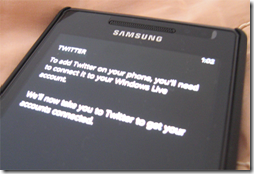 This feature currently doesn’t work on Mango beta builds at the moment, and the reason why it doesn’t is simple – it’s not available on Windows Live yet. (In fact, because I’ve added the LinkedIn connected service to Windows Live, I’ve got LinkedIn integration automatically working on my Windows Phone Mango beta without needing to set it up.) Based on this, we now know that before Windows Phone Mango ships in Fall 2011, you should be able to add Twitter as a connected service to Windows Live again.

In fact, Manan Kakkar also shared with us via a tweet earlier in May that Twitter on Windows Live will also have reply-to and other features:

Indeed, to confirm this, we’ve been following the @twitWL account, which was setup purely for the purpose of testing Twitter on Windows Live (and Windows Phone Mango). You can see a bunch of tweets relating to replies, retweets, mentions, URL shortening, and hashtags. The application the tweets are coming from is labelled "Windows Phone (via WindowsLive)", which links to WindowsPhone.com at the moment.

So we expect that Microsoft will bring Twitter back to Windows Live anytime between now and when Windows Phone Mango ships in Fall 2011. We certainly hope it’s sooner rather than later!