The two sold Hotmail to an investment company and it was eventually purchased by Microsoft in 1997, for a reported $400 million.  Last year Dick Craddock wrote up “A Short History of Hotmail”, including a succession of Hotmail logos:

and a bit of history about how Hotmail, when coming to Windows Live (and facing some stiff competition from Google’s upstart new Gmail), totally rebuilt the back end from using Unix, C++ and Perl to Windows Server, SQL Server, C# and .Net.

The Inside Windows Live blog post even takes time today to announce something we told you about last week, the introduction of a quite useful calendar into the left sidebar (along with a Messenger buddy list, which, we now realize (oops), has been there for a while):

We’re rolling out the mini-calendar on a trial basis now in order to get feedback and expect to turn it on for all users soon. 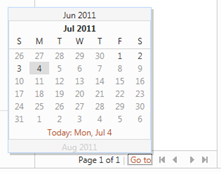 So as a Hotmail user since 1998, Happy Birthday, Hotmail!