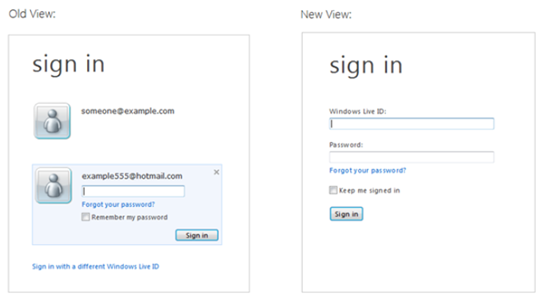 Why? That’s a good question. According to Eric Doerr there were some problems with the old design:

So considering they added features to Hotmail that solve scenarios that previously required juggling multiple accounts, such as adding other email accounts and creating aliases, they felt it was time to change the sign-in. Now the whole thing is focused one one account per device.

In his blog post Eric gives tells us how we can best set up things in the new design. Going from resetting your password (if you forgot, which is understandable if you keep signed in all the time not having to re-type) to how to manage multiple accounts. There he tells about adding email accounts and creating aliases but forgot one other solution: linked IDs, that way you sign in with one account and move to the next from the dropdown (your name). That is limited to just 4 IDs, but hey…one can get creative with that….let’s hope that feature will stay! I for one make use of that one heavily.