At yesterday’s WPC (Worldwide Partners Conference) in Los Angeles, Steve Ballmer took the stage to talk about the state of Microsoft and Windows, touching on Skype (saying it will enhance enterprise level Lync communications, not undermine it), Bing (a new developer’s platform is coming), and a recap of Windows 8 announcements so far (demoed by Corp. Vice President Tami Reller).  But what Steve Ballmer said, and didn’t say, about Zune seems to have a number of blogs jumping to conclusions today, even further muddying the waters about what’s happening with the Zune brand.

It starts (on the video at about 01:13:50) with Ballmer and an assistant demoing voice control for the Xbox.  The assistant, Eleana, says “Xbox…music”, and Ballmer says “Instant access, to 11 million songs”.  No mention of Zune there, although the Zune MVPs pointed out later on Twitter that Zune Marketplace does now indeed contain about… 11 million songs: 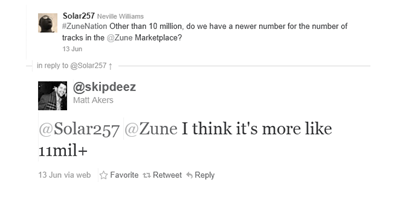 Bing on Xbox will search through Zune, Netflix, Hulu, Xbox Live, and even more content providers, as they come to the Xbox system.

So even though Ballmer specifically mentioned Zune, and referred to it with the “11 million” remark, Business Insider among others took it as the end of Zune as a brand, replaced by Eleana’s utterance of “Xbox…Music”:

Ballmer and other Microsoft execs also shared some other interesting tidbits during the speech:

Other blogs picked up on it, including 1Up.com, who have updated their post based on an explanation of what really happened at WPC yesterday by Zune MVP Marques Lyons.

Still, with all the rumors swirling around the future of Zune and the Zune brand, and the deafening silence coming from Microsoft on the subject, Microsoft has made their own bed with all this Zune confusion.

It certainly doesn’t make sense to release a new Zune device to compete with Windows Phones, with sales that have gone from “very small… to very small”, as Ballmer quipped yesterday.  We think there could be a healthy debate on whether to hang your hat on a “failed” Zune brand for music, or continue on with what brand recognition it does have, and of course this doesn’t factor in whatever may happen with Nokia’s Ovi music service once they come on board later this year, or if that will remain Nokia only.

Isn’t it time to either fully get behind the Zune brand, or retire it?