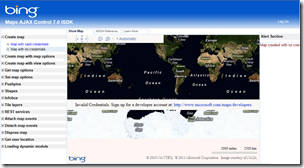 Calculate driving directions using the new Microsoft.Maps.Directions module. This makes it easier than ever to integrate driving, transit, and walking directions into your applications.

Display a venue map using the Microsoft.Maps.VenueMaps module. Venue maps show details of what’s going on inside malls, airports, and shopping districts. Now you can show your customers not just where the building is, but exactly where your store is located inside. This is one of the most popular consumer features on Bing Maps today and now you can make it part of your apps as well.

Show current traffic on the map using the Microsoft.Maps.Traffic module. Not only does this module make it easier to show traffic conditions, the new traffic overlays that shipped with v1.2 of the road map style look better than ever.

Set polyline and polygon stroke dash. To further customize your shapes, use the new property strokeDashArray of the PolylineOptions Object and PolygonOptions Object.

You can try out some of these new modules and features out now at the Bing Maps AJAX Control Interactive SDK, introduced back in May this year. Check them out now!