Games for Windows Marketplace now on Xbox.com; wild rumors on Xbox and Windows 8 integration, and more 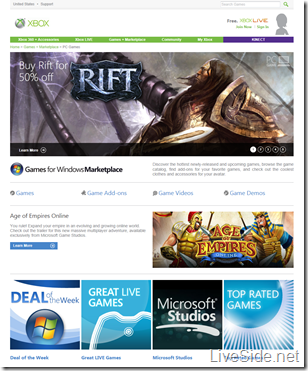 During E3, Mike Delman, Vice President of Global Marketing at Interactive Entertainment Business, revealed that Xbox LIVE is coming to the Windows platform, being the entertainment and gaming service for Windows 8. Well, rumors were recently surfacing that the integration between Xbox and Windows might be much more than that. LiveSide reader Vygantas recently linked us to a post from Insideris.com which seems to suggest that Windows 8 might have built-in capabilities to play Xbox 360 games. Here’s an excerpt from the post:

According to our sources, Xbox 360 on PC will have a subscription fee (just like Xbox LIVE). However, when it comes to online gaming, it will use Windows Live Marketplace and as a result, PC owners will not be able to compete against console owners (at least in initial stage), due to plausible frustrations (mouse vs. controller).

You may think this is just a wild rumor, and indeed it may just be that – a rumor. However, recently Winodws8Italia.com was able to dig up some Windows 8 system resources from a leaked build which seems to suggest that the relationship between Windows 8 and Xbox 360 is closer that you think. The Italian website found references to Xbox 360 within the ntoskrnl.exe file on Windows 8, something not found in previous versions of Windows. This is shown in the screenshot below:

What you interpret out of this is entirely up to you, but a world where the a single OS empowering all PCs, TVs, phones, slates and other devices might actually not be too far away. Andy Lees during the Worldwide Partner Conference 2011 talked about his vision of a unified ecosystem across PCs, TVs, and phones. Here’s a transcript of what he said:

One of the key important things here, though, is the change that’s yet to happen, but it’s about to happen, and that is the bringing together of these devices into a unified ecosystem, because at the core of the device itself it’s possible to be common across phones, PCs, and TVs, and even other things, because the price drops dramatically. Then it will be a single ecosystem. We won’t have an ecosystem for PCs, and an ecosystem for phones, one for tablets. They’ll all come together. And just look at the opportunity here.

What he meant by a “unified ecosystem” is entirely up for different interpretations. Mary Jo Foley seems to think that this could simply mean having a shared marketplace across phones, PCs and gaming consoles, which ties in nicely with what’s happening now with Games for Windows marketplace and Xbox.com. On the other hand, ThisIsMyNext.com seems to suggest that Microsoft might be building a brand new OS after Windows 8 that will run on PCs, tablets, phones, and the next-gen Xbox, all due sometime around 2015/16. There are no right or wrong answers here, but we do know for sure that we’ll find out more about Windows 8 during the BUILD conference in September.