Windows Phone: The one where sharing photos via SkyDrive…doesn’t

One of the promises of Windows Phone early on was the easy ability to share photos, via Flickr, Facebook, or Windows Live.  In fact, it was featured quite prominently in the early marketing materials: 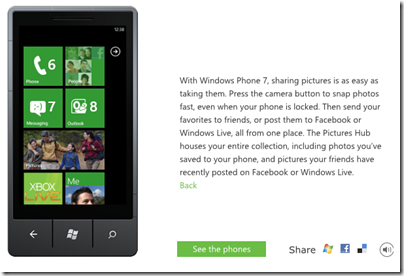 And in a section on uploading pictures to the web, it says:

Snap and share. After you take a picture, upload it to the web so all your friends can see what you’re up to. You can also set up your phone to upload pictures automatically to either Windows Live or Facebook.

Only it doesn’t work that way, not anymore.  According to Omar Shahine from Windows Live, in a forum post, the feature to share photos from your Mobile Uploads folder on SkyDrive has been shut off, no matter what your permissions settings are:

Hi-
Actually, contrary to what the permissions allow you to do, we explicitly disabled this behavior for the mobile uploads folder. The reason for doing so is that too many people were surprised that when they uploaded photos to this folder, that those photos then got published to their Messenger, Facebook friends. At the end of the day, too many people were unhappy and the danger in exposing photos that the user did not explicitly want to share was to high.
We are looking at ways to address the feature in the future so that sharing is more explicit in nature and you can still publish to your friends.
Thanks,
Omar

…and then he further clarifies:

There are two things that happen when you upload to a folder on SkyDrive.
1) the photo is added to that folder
2) if the folder is permissioned to friend or higher those photos are then published to your messenger social feed, as well as the social feeds of any connected networks (like Facebook)
#2 was explicitly disabled for the mobile uploads folder.
-Omar

We just tried it, first by setting the permissions on our SkyDrive Mobile Uploads folder to “Everyone”: 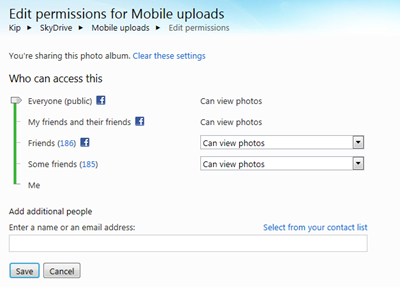 … and then shot and uploaded a couple of pictures from the Samsung Focus, and had someone check their activity stream (thanks, Quikboy!).  Sure enough, they weren’t there.

Now there are some exasperated people responding in the forums:

I don’t understand what you are talking about. Why would people be surprised that by selecting “Share on SkyDrive” from their phones they would, in fact, share that photo on SkyDrive lol? That is the entire point of that option!

…and we can’t say we blame them.  Setting permissions to “Public” should set permissions to public, in our opinion.  Now if Microsoft has to make the folder private by default, perhaps that’s understandable, but advertising a (very useful) feature and then disabling it (for the time being) permanently, well, that’s not making a lot of sense to us.

(Windows Phone only uploads photos to SkyDrive to the Mobile Uploads folder. You can still upload pictures via Zune or Photo Gallery to another SkyDrive folder, or move them from Mobile Uploads to another folder, but that kind of defeats the whole purpose, doesn’t it?)

We’d be happy to hear more from the Windows Live team on this.  Omar?  Harrison?  Anyone?