Just a few months ago, we first heard words about the next next version of Windows Phone OS update, rumored to be codenamed “Tango”, fitting nicely with the naming convention ending with an “o”. Last week a new post-“Mango” build 7.10.8200 was spotted in the wild, sparking speculation that the next update for Windows Phone OS is already in development. Today, a member on Slovakian forum Pretaktovanie.sk (via WPCentral) posted a screenshot showing what claims to be from build 7.10.8200, featuring a universal search functionality in Windows Phone “Tango”. Here’s the description provided by the forum user (translated): 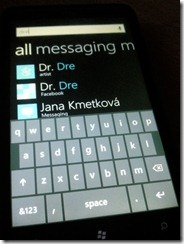 Content Search (Build 8200 Tango), it more or less works, first it´s finding content directly on the phone, and then on the web, the good thing is that Facebook pages work now (finally), I don´t know about Twitter/LinkedIn, I haven´t them synced up, voice activated searching is also possible, similar function what iPhone has.

Indeed, looking at the search bar up the top (click image to zoom in), there appears to be a speech button, indicating that voice searching will also be possible. This new universal search feature looks similar to iOS’s “Spotlight” search feature, which allows users to search through everything on your phone – apps, contacts, calendar entries, songs, email and messages, and more.

While we’re not sure how genuine this screenshot is, but if it’s true, it’s definitely encouraging to see Microsoft already working through the next version of Windows Phone, even before “Mango” getting to the hands of users! Speaking about “Mango”, we heard words from WPMind that Microsoft has released the RTM build (7720) of Mango to developers with non-retail ASUS E600 and HTC Mazaa devices. Seems like it won’t be long until “Mango” arrives in our hands!