News have been popping out from all over the internet today about Nokia, Windows Phones, and how the two will work together in the near future. First we have news coming from AllThingsD.com who recently had an interview with Chris Weber, President of Nokia USA, who said that Nokia will quit Symbian and the low-end phone businesses from North America and focus solely on Windows Phone in that geographic region. According to Weber:

When we launch Windows Phones we will essentially be out of the Symbian business, the S40 business, etc. It will be Windows Phone and the accessories around that. The reality is if we are not successful with Windows Phone, it doesn’t matter what we do (elsewhere).

We’ll develop for North America and make the phones globally available and applicable. In fact, evidence of that is that the first Windows Phones that will ship are being done by our group in San Diego.

However, if you think that the recently leaked Nokia Sea Ray will be the first Windows Phone for North America, the following news suggest otherwise. TheNokiaBlog.com (unofficial) reported that the Nokia Sea Ray might not launch in the United States:

A very reliable source told us that the US will not get the Sea Ray device that was leaked. If you’ve forgotten, it’s the Windows Phone that looks like the Nokia N9. Our source tells us T-Mobile and AT&T are getting Windows Phone devices that are affordable, while Verizon is getting a high-end model.

This is actually somewhat consistent with Engadget’s report yesterday saying that Nokia currently has no plans to bring the Meego-based Nokia N9 to the US. So no Nokia Sea Ray for the US then, but what will Nokia actually bring to North America towards the end of this year? The question might actually be answered by a leaked video from MyNokiaBlog.com which shows off some of the upcoming Nokia Windows Phones, check it out below:

Edit: Oops, either the video was really fake, or really real, as the original video had been pulled from YouTube. Thankfully, WPCentral took a copy and re-uploaded it onto YouTube.

No one knows whether these are genuine concept arts of potential Nokia Windows Phones or not, but they look really nice to me. Check out the still-shots of the two new phones revealed in the video below: 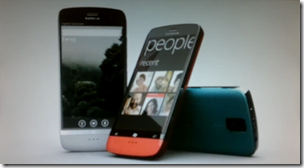 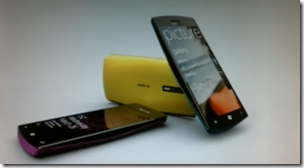 Looking closer at the video and you’d also notice there are several customised built-in apps from Nokia. From the image on the right, you can see on the Start Screen several tiles not found on your regular Windows Phones – Time/Clock Tile, Ovi Tile, and a Navigation Tile . To be honest we haven’t heard much about Nokia playing a part on the Windows Phone OS side, besides the fact that they will be including Nokia Drive & Maps on all Nokia Windows Phones. We also haven’t seen any traces of Nokia in the latest Mango builds, and we doubt we’ll see them in the RTM version. But according to Mary Jo Foley, it will actually be the next version of Windows Phone, rumored to be codenamed “Tango”, that will bring Nokia’s innovation to Windows Phones. According to Mary Jo Foley:

A couple of my sources are now saying that Tango is real and it is, indeed, the next version of Windows Phone OS.

One of my contacts who asked to remain anonymous said he believed there would be at least one and maybe two Tango releases hitting before the Windows Phone 8 Apollo release. He said Tango was “all about Nokia” and focused on hitting the lower-price point for Windows Phones that Microsoft and Nokia execs have been promising. My contact also said the Tango release may be focused largely or even exclusively on the Asian market.

Another of my contacts said that Tango and Sea Ray (the codename for Nokia’s expected first Windows Phone) are often mentioned in the same breath. But Tango is an operating system update and not a handset, said the contact who asked for anonymity, said. (Sea Ray is expected to be running Mango when it debuts, most likely later this year.)

In summary, we know that Nokia is on track to deliver at least one Windows Phone device by the end of the year. But while the rest of the world might get the Nokia Sea Ray, USA probably won’t, but may be getting something better instead. On the software side, it seems like Nokia will simply be bringing OEM built-in apps to their “Mango” Windows Phones at first, but the deeper integration and innovation will be coming later next year with “Tango”. We really look forward to the innovation Nokia will bring to Windows Phones, but at the same time, we hope they leave the user experience consistent – particularly with their “lower-price point” phones that they might bring to the table. What do you think? Let us know in the comments below!