The one where we try to make sense of patents 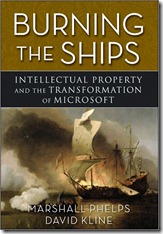 So, Google announced today that it was acquiring Motorola Mobility, and we’ve been reading every blog post we can find since then to try and make sense of it all.  In fact, we were trying to make sense of software patents even before this morning’s momentous news, picking up a copy of Marshall Phelps’ “Burning the Ships”, the 2009 book by the architect of Microsoft’s current patent strategy (perhaps short on behind the scenes detail, but a good overview), listening to This American Life’s recent podcast “When Patents Attack”, which attempts to probe ex-Microsoft CTO Nathan Myhrvold’s Intellectual Ventures and other “patent trolls”, and subscribing to and following Florian Mueller’s excellent FOSS Patents blog and Twitter account.  Mueller has been digging deep into patent strategies for a long time, and his insights are valuable.

Needless to say, there was a lot to read today, too.  So much news about the Google – Motorola deal, in fact, that MG Siegler reminded startups that maybe this wasn’t the best day for a launch, after all.  But when everyone has an opinion, and everyone has an angle, it’s hard to sift through all the news and really understand what’s going on.  We’ve tried, anyway, and here’s our list of Thoughts about Patents:

One thing is for sure, this game is still being played out, and the only surprising thing would be if the smartphone market looks the same in two years as it does now.   Will patents decide the contest?  Will Android’s other OEMs take a new look at Windows Phone now that Google is soon to own Motorola?  Will the patent wars even make a difference in Windows Phone’s attempts to gain market share?  How do you think it will all play out?