A number of reports surfaced today about a set of upcoming changes to Zune Pass, set to take place on September 13th.  The changes have to do with the number of devices you can connect via Zune Pass.  An email was sent out to Zune Pass subscribers: 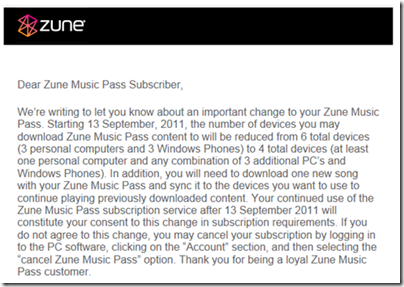 However, since we didn’t receive an email, we wanted to wait a bit to confirm just exactly who will be affected, and our pal Travis over at EnConnected.com has confirmed that the changes are meant for European subscribers only:

Update Matt Faraca @airmattdog on Twitter, who works for the Zune Video Marketplace team has confirmed what we’d been suspecting since we hadn’t gotten the email ourselves: It’s Europe only.

In the US, Zune Pass remains available for up to 3 computers and up to 3 devices (at least for now!), as stated on the Zune.net website:

So if you’re in Europe and have a Zune Pass, you should have received an email alerting you to the changes.  If you’re in the US, you can breathe a little bit easier.