Last Tuesday Microsoft gave us a first glimpse into the future of Windows Live during its BUILD conference, with Chris Jones, Corporate Vice President of Windows Live, demoing several Windows Live Metro style apps on Windows 8. Unfortunately these new Windows Live apps were not made available in the Windows 8 Developer Preview distributed to the public, leaving many wanting to test them out disappointed. We at LiveSide took the time last week and had closer look at what was demoed during the BUILD conference, and we’ll try our best to show you what we know about these apps. In this first part, we’ll show you what we know about the Mail and Calendar apps, looks to replace the functionalities of Windows Live Mail. 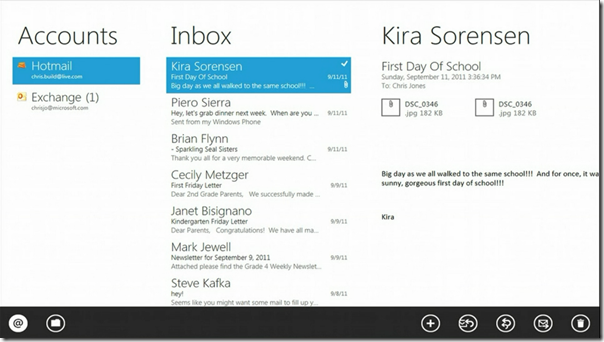 The Mail app powered by Windows Live greatly resembles the one in Windows Phone. By default when you launch the Mail app, you’ll see the Inbox column on the left. Selecting a message in this list will display the actual contents of the email on the right pane. The app bar on the bottom allows you to quickly compose, reply, forward, and delete emails. To select and view a different folder, all you need to do is tap the folder icon on the left of the app bar. The Mail app, similar to Windows Live Mail and the one on Windows Phone, also supports multiple email accounts – whether it be Hotmail, Gmail, Yahoo! Mail, or more. And just like its Windows Phone counterpart, Microsoft Exchange accounts are also supported, which is also a significant improvement over Windows Live Mail. 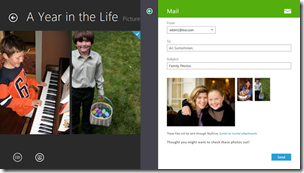 What makes the Mail app different is it’s integration with the Windows 8 Charms. From any Metro-styled apps, with a simple swipe from the right, you can access Charms such as “Share”, which allow you to share things like photos, documents and videos to your contacts via e-mail through the Mail app (see screenshot on the left). We believe the Mail app also integrates tightly with the Search Charm, allowing users to quickly search for the e-mail they’re looking for.

The Mail app will also support Live Tiles, displaying your unread count as well as your most recent emails right on your Start screen (shown on the right). Any unread email counts will also be displayed on the Windows 8 lock screen, much like the Windows Phone counterpart.

We’re yet to see whether the Mail app will also support conversation view, as well as many other standard email features like flagging and message rules. But remember not everything was shown during BUILD, so there may be hidden gems that we have yet to discover. 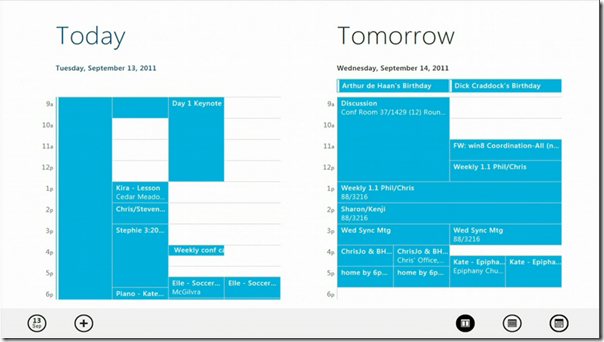 Another closely related app is the Calendar app. Also once part of Windows Live Mail, in Windows 8 it appears to be a separate app just like its Windows Phone counterpart. From what we’ve seen, the app does what it says it does, providing a scrollable two-day view, a week view, as well as a month view. You can also add new events using the app bar, which we expect to work very similar to Windows Live Mail and the Windows Phone app. We expect it will sync with your Hotmail Calendar, Exchange calendar, as well as any other calendars coming from Exchange ActiveSync (like Google Calendar). We’re yet to see whether it’ll also pull in your Facebook Calendars like its Windows Phone counterpart does, but with tight Windows Live integration, it seems very probable that it will be included.

While the calendar in Windows Live Mail doesn’t support any alerts or notifications, we expect that this Metro-styled Calendar app to support this, similar to the Windows Phone version. Your upcoming event will also be displayed on the Windows 8 lock screen (as shown on the right), as well as the Calendar Live Tile, making it really easy for you to view your schedule at a glance (particularly on a tablet).

We know these new Windows Live Metro-styled apps are still in its early stages of development, but it appears that Microsoft is going the way of making them work in a similar fashion to their Windows Phone counterpart, which doesn’t necessarily mean a bad thing. In the next part, we’ll give you a closer look at the People and Messaging apps, which seem to be particularly interesting given the various wireless capabilities of Windows 8. Before next time, let us know in the comments what you think of these new Windows Live Metro-styled apps, and if there are anything in particular that you’d like to see in these apps.