Hotmail: Internet darling to industry underdog… and back? We’ll find out October 3rd

A few weeks ago we received an invitation to “forget everything you thought you knew about Hotmail” and to attend a special event on October 3rd to give Hotmail, “reinvented from the ground up”, a second look.  Well today, as promised in the first email, we’ve received a bit more information: 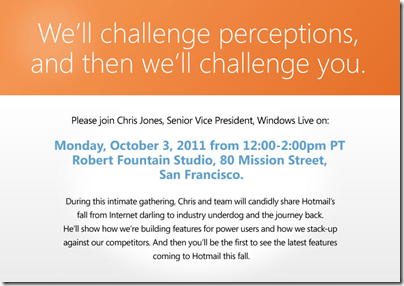 and so a week from next Monday we’ll be making a quicky trip to the city by the bay for 2 hours of Hotmail goodness.  We won’t of course be seeing a completely new version of Hotmail (some folks jumped to that conclusion after seeing the first email).  Much of the work of “reinventing” has taken place over the past year, as readers of LiveSide well know, but looks like we’ll be seeing at least some new stuff, too:

And then you’ll be the first to see the latest features coming to Hotmail this fall.

Chris Jones (and oh by the way he’s back to being a Corporate Vice President, as Microsoft has backed away from the “Senior VP” tag) demoed Windows Live Services in Windows 8 (even though they didn’t make this developer build), and we’re expecting to hear lots more about Hotmail, SkyDrive, and the rest of Windows Live in the coming months.

For this event, however, it will be a chance to see where Microsoft is headed with its “reinvention” of Hotmail, get a peek at some new features, and spend a few hours in San Francisco.  Stay tuned!