We’re down here in San Francisco, at the Robert Fountain Studio, with Chris Jones, the Corporate VP of Windows Live Engineering, to talk about Hotmail, where it’s been and where it’s going, and to get a first look at a couple of new features.  Along the way, it looks like we’re getting a coffee mug that’s going to make Paul Thurrott so jealous.

We’re not quite set up to live blog, but should be able to update this post as we go along.  First off, Hotmail is set to announce some new features, including Newsletter filtering, an addition to Hotmail’s “Sweep” functionality, that lets you categorize email as newsletters, sweep them to a folder, and even unsubscribe from them, all from within Hotmail.

Hotmail is also adding categories, so if you’re on the fence in the “categories vs. folders” debate, now you can do both.

With today’s announcements, Hotmail says it now has “Flags done right”.  Now users will be able to flag messages, and they’ll stay at the top of your inbox.  Again, Flags will work with Sweep.  Hotmail also includes Scheduled cleanup, so you can move or even delete mails from a sender after 3, 10, 30, or 60 days.  You can schedule cleanups to only keep the latest message from a sender, handy for things like daily deals.

On the UI front, Hotmail has added Instant Actions, to make the most common tasks easier.  Customizable buttons appear as you hover over a message so you can flag, sweep, delete, etc.  Of course you can just turn the feature off, too.

Along with the nice coffee mug, we were provided the almost obligatory infographic, so we’ll leave you with that for now: 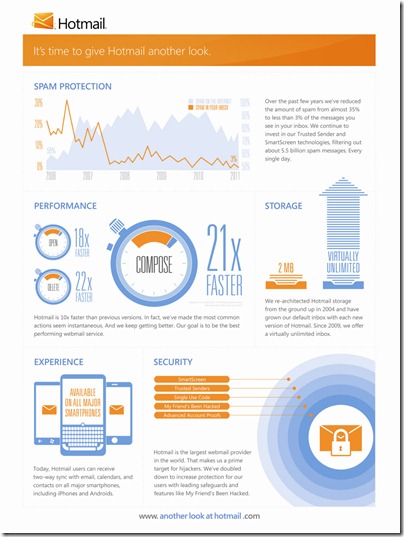 And now for the updates, notes on Chris Jones’s presentation:

You can also check out the official Inside Windows Live blog post, and demo videos for all the new features are available at http://www.anotherlookathotmail.com.