With the Windows Phone “Mango” update just released to 50% of existing customers, news are already coming out for the next update codenamed “Tango”. The latest news came from Thailand’s Bangkok Post (via WMPU), where one of its reporters recently interviewed Birathon Kasemsri Na Ayudhaya, Managing Director at Microsoft Thailand, who said that the company is set to launch its “biggest consumer brand campaign” later this year. In addition, he quotes the following: 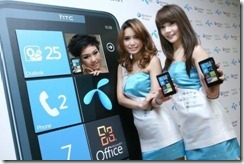 [Microsoft] plans to collaborate with global phone makers Nokia, Samsung, HTC and LG to push its mobile OS to second in the smartphone market by 2015.

It will introduce Windows Phone version 7.5 with Thai language support early next year.

Given the report claims that Thai language support will be coming to Windows Phones “early next year”, we deduce that at least the “Tango1” update, which is aimed at adding additional language support, will be out by early 2012. This also places it at a reasonable timeframe before the next major update – codenamed “Apollo”. If we’re expecting to get “Tango” by early 2012, which is only a bit more than 3 months away, we should be expecting to hear more info about the update soon. Stay tuned!