As expected, Microsoft announced in a press release today that it is expanding partnerships with entertainment providers to bring new services to Xbox Live on the Xbox 360 this holiday season.

Nearly 40 TV and entertainment providers from more than 20 countries around the world are on board with the plan to bring live and on-demand TV, movies, games, sports, music and more to Xbox.  A new Xbox dashboard will combine the Xbox, Kinect, Bing, Xbox Live, and the entertainment content to provide the services:

“Today’s announcement is a major step toward realizing our vision to bring you all the entertainment you want, shared with the people you care about, made easy,” said Don Mattrick, president of the Interactive Entertainment Business at Microsoft. “Combining the world’s leading TV and entertainment providers with the power of Kinect for Xbox 360* and the intelligence of Bing voice search will make TV and entertainment more personal, social and effortless.”

The press release includes the long list of both existing and new providers, including the BBC in the UK, Verison, Comcast, Bravo, and iHeartRadio in the US, and many many more. 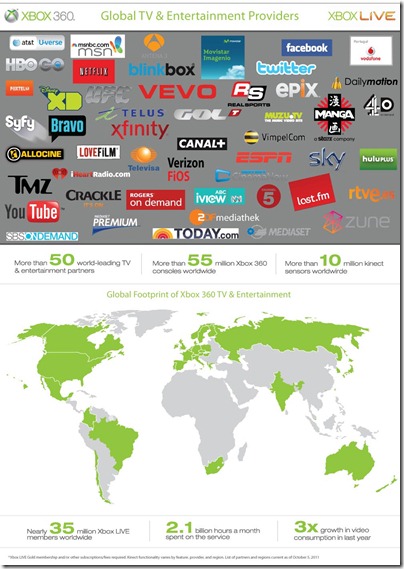 The new services, along with Bing for Xbox Live and Kinect, will be rolling out this holiday season.  Today’s news does not give any precise dates.