TechCrunch has spotted what apparently is a new offering from Bing, “Bing Deals”.  This is a separate offering than the Bing Deals aggregation site we wrote about last month.  While they both appear to be called “Bing Deals” (maybe the new offering, which now appears to be in a testing phase, will be rolled into the aggregation site (?)), the aggregation site is at www.bing.com/deals, and this new offering, powered by Tippr according to TechCrunch, is at www.Bing.com/daily-deals.  Judging by a quick scan of the new site, what we’ll call for now Bing Daily Deals offers Facebook integration, a scheme to “unlock” deals when enough people show an interest, a countdown timer, and some significant savings.  Deals are offered in a limited list of cities only, apparently (Atlanta, Austin, Boston, Chicago, Dallas/Fort Worth, Honolulu, Los Angeles, “Southern Oregon”, New York, San Diego, San Francisco, and Seattle). 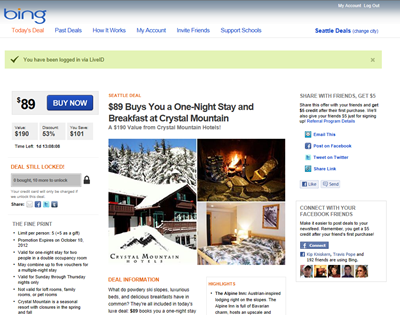 The new site is live now, we logged in and immediately got an email welcoming us:

Nice work signing up for Seattle Bing Deals! We pride ourselves on being able to bring you the best that your city has to offer, so keep an eye out for some fantastic offers.

Here’s how this works:

Bing Deals gets better with friends. And we know you’ll love what we have to offer, so we’ve made it easy to share this with your friends and family. Simply head over to the Invite a Friend page to get started!

You can read more on TechCrunch, or check out Bing.com/daily-deals.